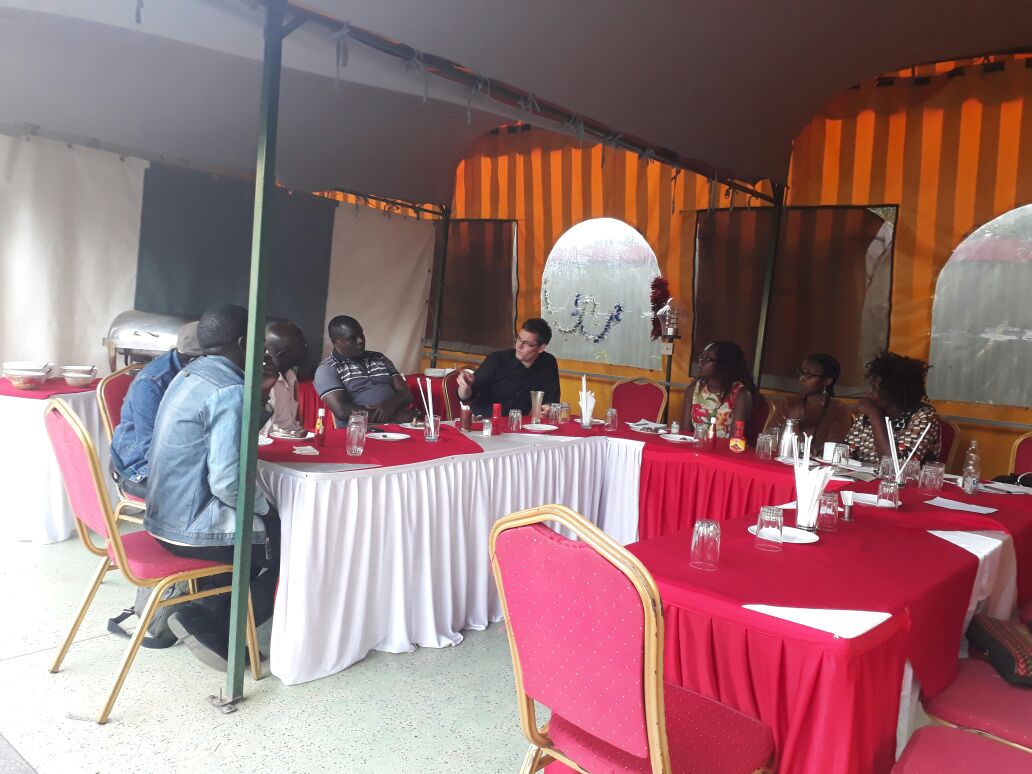 I was just entering the shade hotel in the green area of Karen and immediately being greeted by a huge banner at the entrance of Kivuli garden written Merry Christmas and a Happy New Year. It was the day for the annual Urban Change Lab meet up for craftsmen and I being the Local operation manager for Kenya was there early to finalize on the preparations for the event that was set to happen on that afternoon.

Ten minutes to the start of the event I was walking towards the Kivuli Gardens when I heard my name from afar. It was Mr. Naftal, his face was glowing with an ear to ear smile, he kept acknowledging the fact of how early he was and how it was contrary to the infamous Kenyan tradition of “Kenyan Timing”. Arriving before time definitely has its advantages as he got to have a one on one conversation with Jochen on the plight of craftsmen in Africa and how things to become better, which led to him to have a conversation of how he should create a sculpture that would represent the African Craftsman.

Soon, as we continued talking about different issues concerning craftsmen in the region more and more craftsmen joined us. The meeting started off with everyone serving amazing food that had been prepared by the hotel staff and that was made up delicious amazing African dishes with an addition of Nyama Choma which was what many had really been waiting for.

In attendance were two brothers called Allan and Daniel who took up making bags and different fabric crafts from their father who had taught them the skill, Naftal, a sculptor, Esther and Caleb who work with wood to make their artwork, Virginia who works with Fabric and metal to make her merchandise then there is Audrey, who works with Fabric and leather to make items and Agesa who makes beautiful custom handmade journals.

One of the highlights of the meeting was when Caleb mentioned that never before had he met someone who would send him money to have work done without physically meeting him. Caleb as one of the craftsmen with Urban Change Lab has gotten to do quite a number of realizations of orders from Germany and fully paid without getting to physically meet Jochen who facilitated all the payments from Germany. It was because of this that he traveled more than 300 kilometers from his rural home in Kisii, Kenya to come and meet Jochen, the person who had such a level of trust in his work.

During the entire meeting, we talked about quite a number of issues that would go a long way to improve how we as Urban Change Lab can be able to better work with craftsmen her in Kenya. We received quite a good number of feedback that will go a long way to make the Urban Change Lab platform easier for craftsmen to navigate around. One major topic that we looked at was how the Craftsmen should interact with international clients in regards to pricing their items as well how to effectively communicate with the clients.

After a round of discussions, I felt a closeness that had developed among the group. At some point, Caleb was communicating with Esther and Naftal and getting good advice in relation to marketing artifacts. Partnerships were also being formed among the craftsmen who were there and the best part was that some of the craftsmen actually wanted to order something from other craftsmen from the group. The meeting that was initially meant for just talking about issues on Urban Change Lab had become a networking platform for the craftsmen. The entire event was nothing less than beautiful.

It ended at a high note with everyone being happy with the outcome of the meeting and having learnt a lot more about Urban Change Lab as well as different other topics that are important to craftsmen. This day made me see clearly what we as The Urban Change Lab are working for and encouraged me to continue working at my best to ensure we do not let all these amazing people down.

A young enthusiast on creative designs and artwork who lives in Kenya. He holds a bachelor’s degree in Real Estate from the University Of Nairobi. He is a professional on matters real estate and currently working in commercial property management. He also has been working for Jumia Kenya, the biggest online shopping mall in Africa, for two years as a Silver level sales consultant. Previously, he worked with AIESEC, an international student’s organization, in various organizational and operational roles. He has vast knowledge and experience in digital marketing and acts as an independent consultant for a wide range of firms in the area.